Updated Nov 2014: link to the PPT I usually use and instructions here: https://www.dropbox.com/sh/6sfl9yt5shsfxjf/AAAMLcnG9A9xgXrMy1lEvD-fa?dl=0

What started off as a plea for ideas to shut up my year 10s who needed to be quiet for those completing their controlled assessments turned it many lessons of fun and surprisingly quiet chaos thanks to Michael Smith aka @Fleckneymike – this is all his fault.

As the title suggests the idea was to have something to do with year 10 that meant 9 out of 34 of them could finish their controlled assessment in peace. I simply required a task to keep them busy. Thankfully, as sometimes happens, I found a space for them to do their CA supervised elsewhere so I could actually ‘teach’ this as a real lesson. I did as Mike told me to do and googled Austen Kleon, popped to the shops on a dreary Sunday evening, and made a totally unnecessary Powerpoint. The reason for this was a) in case any one walked in and b) so I could send it round if necessary to those people who wouldn’t get the ‘Google Austen Kleon’ guide to the lesson. There’s not a lot to say about Blackout Poetry other than it sparked a simple idea to prove to pupils that poetry need not be boring and there is a way of creating poetry without even writing.

My middle set year 10 are really hard to engage at the best of times, but as soon as I did this with them they picked up the (stolen from other people’s rooms) black pens and got going. They were fairly quiet considering I hadn’t asked them to be and enjoyed being allowed to make a mess if they wanted. They made two or three poems during the lesson and their extended work was to explain why they had chosen the words they had left and how these words related to the poem’s title. I had asked them to pick from 8 themes and create a poem. All these themes linked in somehow with the poem we were looking at later in the week (Casehistory: Alison (head injury by U. A Fanthorpe) .  This was their first lesson after 4 hours of controlled assessment and it was clear they enjoyed being creative and were pretty shocked by what they had managed to make. My second set, who in comparison are very easy to engage also really enjoyed the task. I once got told never to just give tasks to pupils because that’s not learning but in this case I would disagree. This ‘task’ became learning very easily because they loved being creative, they created a poem or two that they would have never been inclined to do normally. Moreover, they began to realise that it didn’t matter what article they were drawing on because all meanings are adaptable and flexible. They turned articles about football players into poems on loss. One turned a film review into a poem about grief. All this was happening whilst they were chatting away having a lovely time without me bellowing about levels or targets.

I taught this lesson twice and I know both classes really enjoyed it. In fact giving my middle set the freedom to be creative, with little guidance, meant they astounded me and themselves with their imaginations and ability.

Much to Michael’s dismay I did add Learning Objectives to my lesson and I did have a point in mind, but it wasn’t complicated. It was along the lines of: be creative, see what you can find, don’t think to hard but look what you can make.  I shared the lesson with my faculty and spoke to Mike again on Twitter later that week. He let me know what his pupils had thought about the lesson. One said, ‘We learnt how to make something new out of something old.’. I think this is a more than fair enough assessment of the lesson and not one I’m disappointed in. One of my least forthcoming pupils said ‘this is alright actually’: which from him is high praise indeed.

As with many great ideas the subsequent conversations between myself, Michael, Pete Jones (@Pekabelo) and many others led to other ways of creating poetry without writing anything – including the brilliant Book Spine Poetry idea from Pete which I tried out with my year 7s resulting in fairly similar outcomes: creativity, freedom, imagination and inspiration.

As usual Twitter saved the day and refreshingly it reminded me that learning can be found in all sorts of ways and often it is the little ideas that count. It reminded me of Hywel Roberts’ philosophy of helping children to learn accidentally and recognising why imagination needs to be developed in the classroom. The simple task of creating the poetry led to pupils asking questions including ‘why are we doing this?’ which led to some great conversations which were quite enlightening for me. The reason we did it was simple: because I liked the idea of not knowing the outcome. And as it turned out the outcomes were great. I also think of Hywel Roberts’ book ‘Oops!’ when I think about the display I created on a Thursday evening using the week’s poetry work. Display should ‘carry meaning to those who look at it and display is a reflection on you’. My display is a reflection of a little risk taking last week. It is a good lesson to do towards to the end of term but also a great one to use when introducing poetry. I’m hoping to use this again during our Poetry Festival in the summer term. It’s a way in which any pupil can create poetry without that element of fear and eradicates the usual preconceptions which surrounding writing poetry.

Some examples of book spine poetry below. Lesson plan: Grab some books, pile them up, move them around, try and make them make sense…

That is really it. I made a little worksheet for my year 7 who had to do a poem in pairs first then pick from a theme and try to make a poem about that (much trickier than it sounds!). They also wrote the poems into their books and we had a look at each others’ at the end of the lesson. If you have a librarian that will let you try out this lovely lesson too. 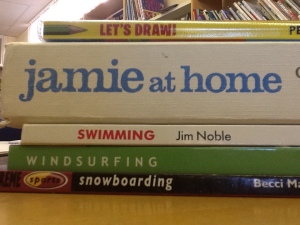 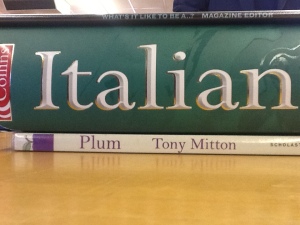